The Power and Beauty of Interfaith Fellowship
By Imam Mikal Saahir
Written March 1, 2010 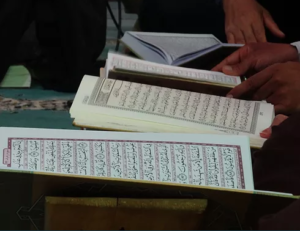 Muslims, Christians, and Jews all agree that we have two fathers in common, Adam and Abraham.

Adam is our father because our three faiths believe him to be the first man created, or established by G-d. And Abraham is called “Father of the nations” in the Old Testament and in the Holy Qur’an he is called the “Imam (leader) of the nations (mankind).” The common root that unites all of the children of Abraham – Christians, Jews, and Muslims – is undeniable.

These two fathers give us all a common relationship that says that in the beginning, we all were one community – the family of mankind.

This truth is magnified in Islam’s holy book, which reads: “Mankind was one single nation, and Allah (G-d) sent Messengers with glad tidings and warnings; and with them He sent the Book in truth, to judge between people in matters wherein they differed; but the People of the Book, after the clear Signs came to them, did not differ among themselves, except through selfish contumacy. Allah by His Grace Guided the believers to the Truth, concerning that wherein they differed. For Allah guided whom He will to a path that is straight.” (Qur’an chapter 2: verse 213)

Our Creator promises that he will reunite His people. However, too many people in almost every religion seem to claim that this “reunion” will favor their particular practice of faith. Allah (G-d) says that he knows best. Further, Allah says that the best among us is the one who is most mindful of serving Him.

Inclusive prescriptions of human excellence that do not favor one race, gender or religion over another is the beauty and power of interfaith. But, unequivocally and emphatically, interfaith is not the watering-down of one’s personal faith when interacting with a believer of another faith.

An enormous mercy that interfaith yields is the opportunity to learn firsthand of another believer’s faith directly from one who lives that particular faith.

Today we live in a global society; a worldwide community of humanity. Interfaith fellowship grants excellent opportunities to expand one’s familiarity with the inner workings of the other person’s faith.

All around America these exchanges are being established – and quite unpretentiously. In many aspects Indianapolis may be on the cutting edge of America’s interfaith activities. Our interfaith initiatives have borne local, national and international results that include clothing and feeding the citizens of Indianapolis via the Interfaith Alliance of Indianapolis and the Interfaith Hunger Initiative (IHI). This hunger effort has now extended to Kenya, Africa.

Another entity, the International Interfaith Initiative (III) working with Muslim, Christians and Jews have built four Habitat for Humanity homes in Indianapolis and one home in Amman, Jordan.

There are many other local interfaith activities, but at this time I’ll only mention one more. The National Alliance for Mental Illness (NAMI) has a project called Faith-CEP, which is an educational arm to teach clergy members of all faiths about mental illness. Faith-CEP has benefited people of all faiths – and their families who are challenged with mental illnesses in our respective communities.

We thank our Creator for giving us the proper patience needed in order for interfaith dialogue to take root and become a part of our lives. We thank G_d for giving us a common respect for our fathers Adam and Abraham. It is through interfaith communication that we are recognizing that we have much more in common than issues that divide us.

Our interfaith exchanges and discussion have served as a sharpening stone that has helped hone our faith and sensitized us to our common human excellence. Quite honestly, I say without reservation that interfaith involvement has made me a much better Muslim.

NOTE: The spelling of G-d for “god” is used when referencing or mentioning our Creator to avoid the spelling “God”, which in reverse spells “Dog.” We feel that it is disrespectful to have a spelling for our Creator that reminds the reader of a dog. Surely our Creator is Greater!