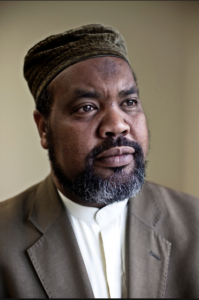 hammed is the leader of mankind and he’s to be seen firstly as one coming like us a common man claiming no superiority of matter, the matter is the same as all other matter, his matter is the same as our human matter, no angel, no god, man like us. His nature is the nature of common man like all of us, that’s his nature. And he was uneducated like the ignorant masses, but was not ignorant he had good common sense, he had excellent, superior common sense, but he didn’t have formal education, but superior common sense.

G’d say no I don’t need you to teach, I taught the first man, I created the first man I taught the first man, I don’t need you to teach, its for your own good that you share, that you are charitable, just by your fellow man and work to liberate him, keep him free, give him opportunity that I created him for, its for your benefit. If you don’t do it then I will come to him again and I will give him the way and the light and he will become your master and your leader, leader of the world, that’s exactly what happened.

And if you study the Bible, if you don’t study it, don’t start please it’s a very trying thing but if you study the Bible you see that it talks about the problem of disrespect from those who have knowledge, those ho have greatness, their disrespect for the common person, that’s all its talking about, Jesus the common man, the Great Jesus, the great Christ Prophet peace be upon him, he’s a common man, he was not educated by the world, that’s what it means by there was no place for him when she had her child, peace be upon him and his mother, when she had her child there was no place, nobody received her, just like you, you couldn’t go to certain hotels a few years ago, no place to receive you because you were despicable, they despised you, you were a low creature, not equal to them, well that’s how they treated Jesus.

John 1:46; Can good come out of Nazareth

And the bible say can any good thing come out of this place he comes from? Mean that these people are despicable, they have no civilization, no education, they have no stature, no real character. Then Muhammed comes another one, not educated and Moses before him another one not educated so G’d is telling us and finally the message comes home in Muhammed say and he was not a man of letters he was of the Ummi, people just having mother wit that’s all, not formally educated and G’d says I will teach you so that you will not forget, I will give you the lesson and educate you so that you will not forget, he didn’t forget, what G’d gave him he shared it with mankind.

And because of the knowledge that G’d gave him the education G’d gave Muhammed the whole world had a rebirth and came into greater education than they could have ever possible come into without Qur’an, so this is the great miracle for mankind and the great comfort to mankind. Well we have everlasting proof now that no matter how mighty a people become and no matter how strong their dominance is in the life of mankind or over the common man, there is a day coming when a common man is going to break their grip on them from the society and liberate the whole world because it already happened, G’d did it through Muhammed.

So now we don’t have to ever fear that the common man will be enslaved forever, can’t enslave him forever the G’d that created him will teach him and make him the leader of the whole world we don’t need it any more we got Muhammed, its forever; but if it was possible for them to do it then if we believe in Muhammed.

Believe in Muhammed believe in self